As the weather starts to get colder, I like the fact that I can turn on the oven and bake bread without baking everyone in the house at the same time!! I thought it would be nice to take a crack at a recipe that has been in my husband’s family for many years. This is the recipe for Hot Cross Buns or “Yeast Buns” that his Gran used to make by heart. In order for it not to get lost his Mum wrote down the recipe. I thought it would be fitting to publish this recipe as captured by his Mum (I hope she doesn’t mind!).

It is a very simple recipe and I love the fact that it is quite a general. For the “mixed spice” I used cinnamon, but I think nutmeg or even pumpkin spice mix would be yummy.  For the “mixed fruit”, I used a combination of dried currants and dried chopped fruit. I also added about a teaspoon of salt. And because we’re in Canada, I used Robin Hood’s “Best for Bread” flour.

After kneading all of the ingredients, I put the dough in a large bowl that had been greased with a little vegetable oil.

I let the dough prove on the kitchen counter for about 2 hours. I thought it fitting to use one of the tea towels that we had given Gran.

The dough practically exploded out of the bowl! I rolled the dough into buns and placed them on a parchment paper-lined pan and let them prove for about another 30 minutes until they doubled in size.

I popped them into a 400ºF oven for about 20 minutes until they were golden brown. To finish them, I melted 1 tbsp sugar with 1 tbsp boiling water and glazed them as soon as they came out of the oven.

And there you have it. A family recipe and tradition that has made its way from Devon, England to Toronto, so that another generation can enjoy it. I hope Granny would be proud. And I hope you enjoy this recipe as well. 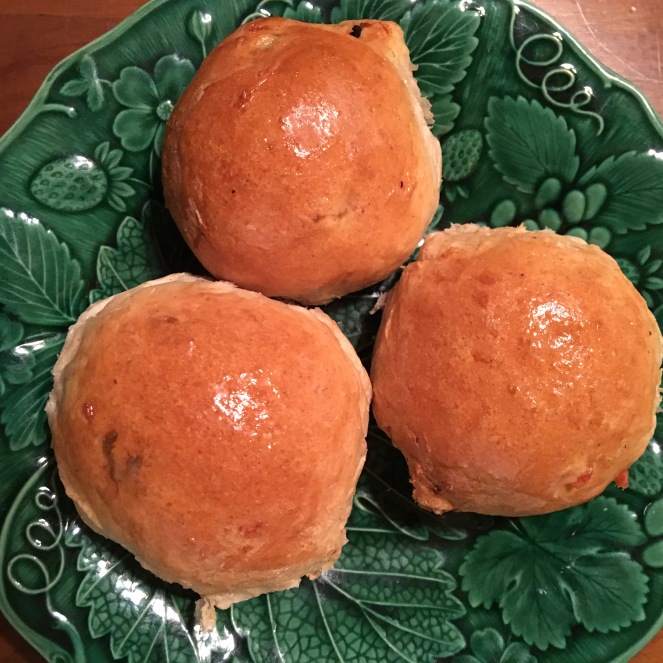